A got a call yesterday from a local falconer who had a Buzzard handed in to him by a couple living near Bellsfort, Newmarket-on-Fergus.  The bird was picked up weak and hungry.  I got a chance to call around at lunchtime today to see this young Buzzard on the off chance that history might repeat itself, like a case back in October 2005 when a similar weak Buzzard turned up in Tulla, and the bird ended up being Irelands first confirmed Rough-legged Hawk from North America (see article & images below). When this Rough-legged Buzzard was released at the Slobs in Wexford under my recommendation, I was on a birding holiday in Florida, so I missed the exciting and controversial release. 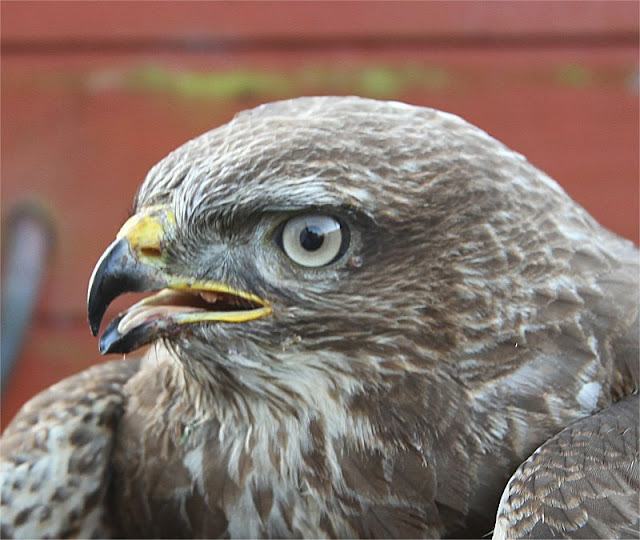 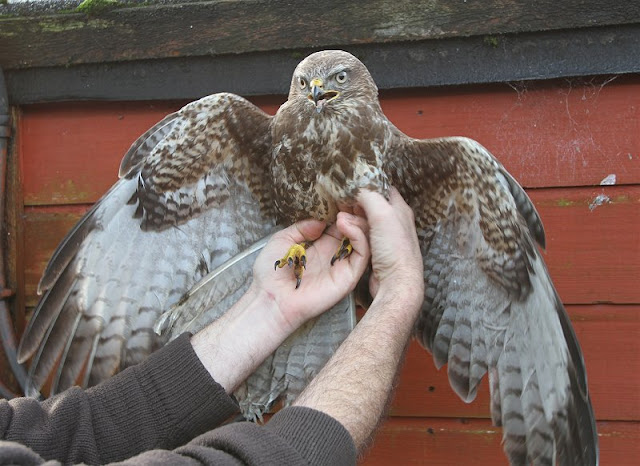 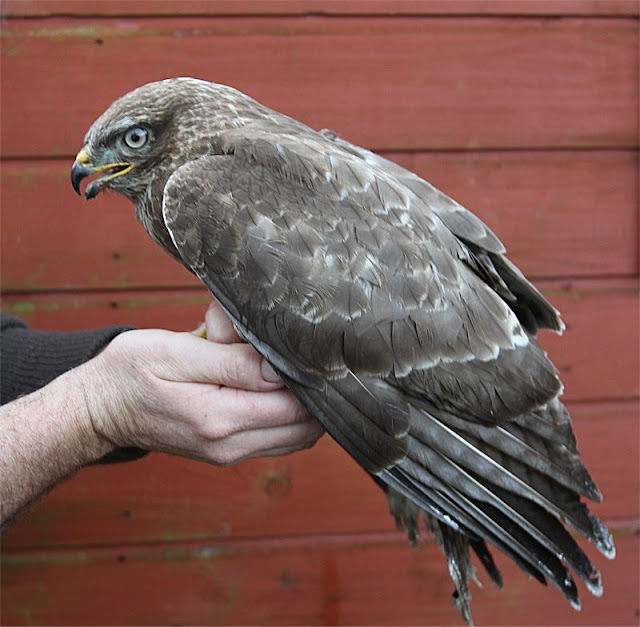 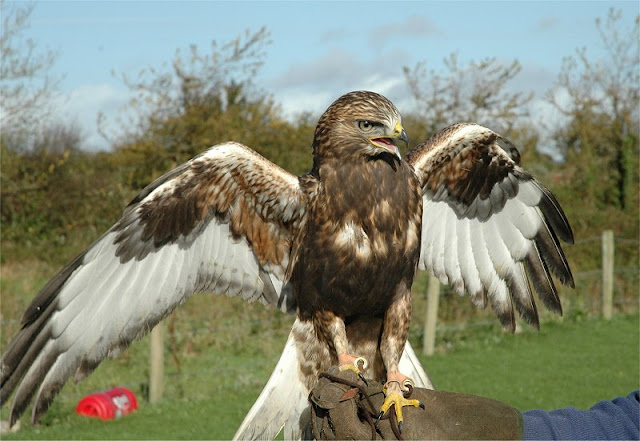 Dark morph juvenile Rough-legged Hawk in Tulla, October 2005 © John N Murphy
On the 11th October 2005, Alan Donovan found an exhausted buzzard in a field near Tulla, Co. Clare. It was so weak that he simply picked it up and took it home to care for it.
The bird responded well to Alan's good care and gradually regained its strength.  Alan informed local wildlife Ranger Barry O'Donoghue who, in turn, contacted JNM and invited him to take a look at the bird, still in captivity.
JNM provisionally indentified it as a Rough-legged Buzzard. However, he could not reconcile certain aspects of its appearance with that species, so he asked me to look at some photographs he had taken of it.  It was, in fact, a beautiful example of a dark morph juvenile of the North American form of Rough-legged Buzzard, known as Rough-legged Hawk Buteo lagopus sanctijohannis. As no equivalent dark morph is found amongst Western Paleacrtic Rough-legged Buzzards, it is not surprising that the identification was not easy to resolve by those who referred only to European field guides. 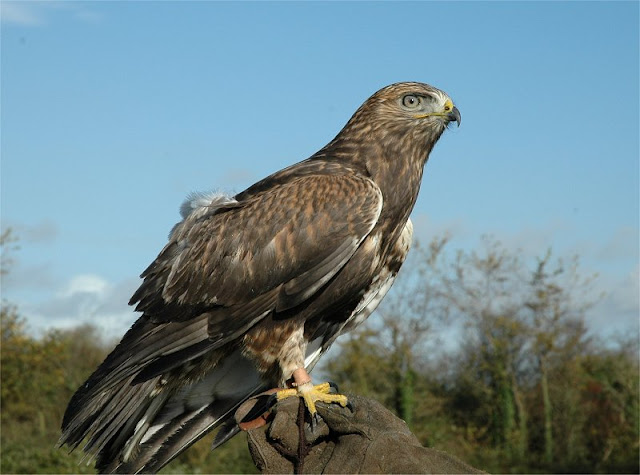 Rough-legged Hawk, Tulla © John N Murphy
The bird continued to recuperate under Alan's care and, having apparently regained full strength (its weight had increased from 400gm when originally rescued to a much heavier 770gm), it was released on the suitable habitat of the North Slob, Co. Wexford on 2nd November.  retaining a wild bird of this kind in captivity any longer than absolutely necessary runs the real risk of it becoming unsuitable for direct release due to the inevitable danger of the bird becoming too used to its handler.  Also the physical condition of its musculature can deteriorate rapidly if a bird is not getting sufficient exercise (if it happens to be a bird of prey, it may need to be 'hacked' back into the wild, a far less satisfactory option).  Despite the Slobs being 'chosen' for it as a suitable habitat, the bird clearly had other ideas.  Almost immediately after its release, it flew off strongly.  Clearly, it had indeed recovered well, and it was not seen again. 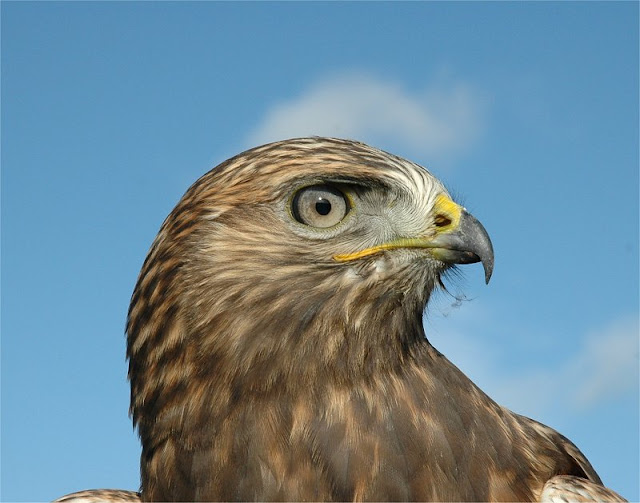 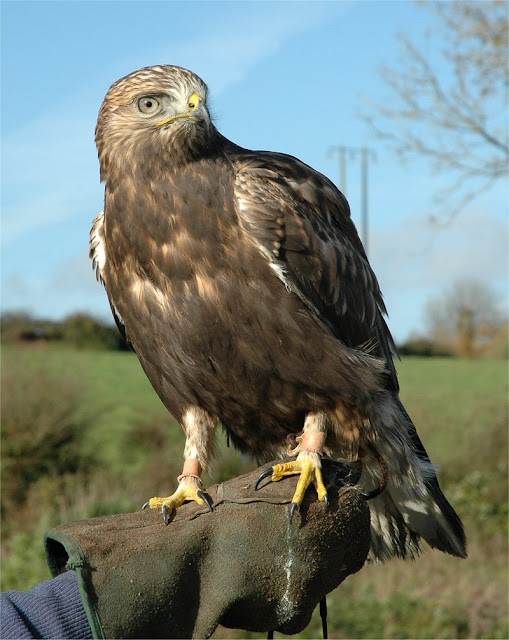 Rough-legged Hawk, Tulla © John N Murphy
The first Irish and third European record of this Nearctic race of Rough-legged Buzzard Buteo lagopus. The subspecific identity was in no doubt due to its having been a dark morph bird, a plumage phase which is unknown in the Palearctic form (Mullarney and Murphy 2005). This bird was discovered in apparently exhausted state and was so weak that the finder was simply able to pick it up. Its weight was a mere 400g when discovered, but thanks to the expert care provided by its rescuer, it recuperated well. Three weeks later, when its weight had risen to 770g, it was deemed well enough to be released back into the wild. The North Slob in Wexford was considered to be the most suitable site for this, due to the much greater abundance of suitable prey there than in the area where it was discovered. There also appeared to be a stronger likelihood of being able to monitor its physical well-being in this area. Regrettably, however, the bird disappeared as soon as it was released.
Posted by John N Murphy at 3:25 PM