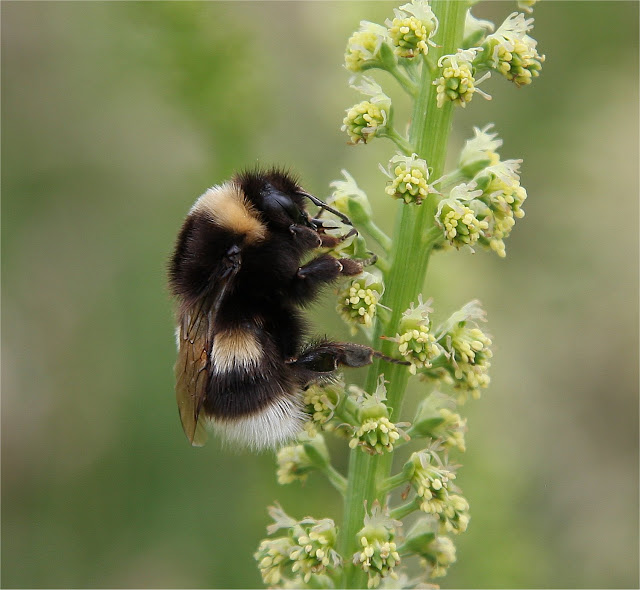 White-tailed Bumblebee © John N Murphy
This week sees the the farming community in full swing with tractors and combines going 24-7 to try and bring in the second round of silage from countryside meadows.  We also see tidy towns committees fully kitted out with gloves, clippers, strimmers and lawn mowers, all busy, buzzing around our towns and villages in the tidy up and preparations for the judging of this prestigious title.  Roadside verges are also being trimmed by your local councils, as the colourful grasses and weeds that grow there begin to encrouch onto the tarmac, looking unsightly and untidy to the human eye.  With such activities, little or no thought is given to one of the most important creatures on the planet, the humble bumble-bee.

Here in Ireland we have a total 101 different members of the bee family, three of which have become extinct and more than half have undergone substantial declines in their numbers since 1980.  The distribution of 42 species has declined by more than 50% and these species will need to be closely monitored over the next few years so that they don’t go extinct from our land.

We all know that without the birds and the bees, life on earth would probably not exist.  These humble bumble bees are one of the key elements in the distribution of pollan and birds of seeds.  Bees help cross-pollination plants giving us new growth and food, and are responsible for much more than we realise.  Albert Einstein once said that if our bees become extinct the world would only continue to live for another four years, a worrying thought. 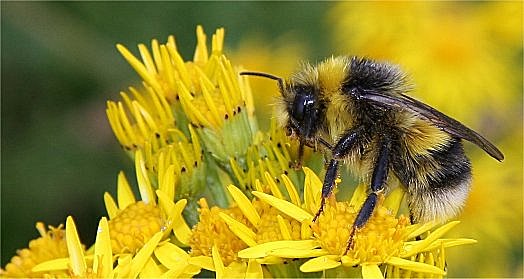 So what is causing this decline in bee populations. Well many natural habitats, like grassland meadows that use to exist as extensively areas across Ireland, have now been reduced to small patches here and there, with large areas of housing or intensively farmed land in between.  This is called habitat fragmentation.

When one of these remaining habitat patches is destroyed, the bees that live there may not be able to move because often the nearest area of suitable habitat is just too far for them to reach.  This we see through the loss of roadside verge vegetation due to the cutting back of wild flowers in the height of the summer. With no corridors for them to move through like these roadside verges and flowering hedgerows, bees have nowhere to go, they become homeless and the population that once lived there, dies out.  When this happens across Ireland, the number of populations can fall to a very low level and the species run the risk of extinction.  Insects have a tough life, and they face lots of natural hardships.

In more recent times the Irish summer weather has been unexpectedly wet and cold, causing large numbers of young bees to freeze to death.  Events like these are natural and a large healthy population will be able to recover.  However, if numbers have already been reduced through human destruction of the environment, the chance of recovery is much smaller.

Around the world the story is similar.  In parts of the USA and Australia bee populations have gone so low that their governments have brought in legislation to aid bees for the pollination of vital cereal crops and fruits.  Drastic measures are being carried out to try and assist farming communities to get bees back into their countryside to pollinate crops. One such measure is to drive a large 60 ft truck from place to place with hundreds of beehives in the container on the back.  Every morning these hives are driven to designated parts of the country, doors opened and bees are released for they day to head out into the fields and go about collecting nectar.  As they do this, they help spread pollan from fruit tree to fruit tree helping cross-pollination to take place.  The bees return to their hives at night where the doors of the containers are closed and then these hives are driven off to some other part of the country the following day, where the bees are released once more to go about their business.

These are drastic measures indeed and hopefully we will never see this happen in Ireland. But our Honey Bees are in difficulty.  Did you know that there are virtually no wild beehives in our countryside.  All our bees are now kept in wooded, artificial beehives by beekeepers.  One of the reasons this has happened is due to the fact that we do not have enough mature native trees for bees to set up home in and as I stated earlier the fragmentation of natural habitats.  Another major issue is the spread of the bee mite.

Honey bees in Ireland face a new and potentially deadly threat following confirmation of the arrival of a virulent parasite. The parasite known as the varroa mite, sucks the blood of bees, eventually killing its host.  Honeybees are notoriously under siege from a host of global ills, some still deeply mysterious. Both the USA and the UK report losing a third of their bee population. In Italy it has nearly halved. In France, an average of 300,000 colonies have disappeared every year since 1995.
So it looks like we humans are going to have to step in and help the bees recover.  If we keep cutting out areas that look overgrown or untidy we might just in the long term be killing off future generations, of not only bees but of our offspring as well.  Simple measures can be taken to help.  Leave some parts of your garden or fields untouched for wildlife.  I myself try to leave stands of wild flowers in the lawn to help the bees.  Buttercups, dandelions, daisies, Red Clover, bramble and Fox Gloves are all great nectar providers for bees.  Thankfully we are returning to growing our own vegetables and fruits in our back gardens.  A simple thing like planting an apple tree in your garden that flowers in spring, will attracted the humble bumble by the smell of the nectar.  From your garden this little bee will head next door and help pollinate your neighbours apple tree. Hence, life continues and we see the fruits of the bees labour.  It’s good for all of us and I love honey, don’t you!
John N Murphy
Posted by John N Murphy at 9:59 AM